Choosing Between Ultrasonic Sealing vs Heat sealing on a VFFS Machine. Editors Note: This blog was originally published in March of 2017 but has been edited and republished with additional content around this  topic.

Technology continues to amaze me. I’m sure I am blind to a majority of what is out there outside the packaging world, but from what I am aware of, it makes me wonder how I ever lived and managed to miraculously survive in a world without even the now commonplace cell phone. I just watched a video last week of a house that was made with a 3D printer. In one day! I’m impressed.

How have we seen these advances translate into the packaging industry? Even though ultrasonic sealing with plastics has been around since the 60’s, about ten years ago, we started to see ultrasonic film sealing trending in the Packaging Industry. This innovative technique to sealing was (and is) exciting, because of the implications it proposed as far as extending capabilities in certain areas. There are several lauded benefits to using ultrasonic sealing for your pouch packaging:

Rovema currently offers excellent ultrasonic sealing capabilities for their VFFS solutions, even for existing machines in the field. But like all things, ultrasonic sealing has considerations, mostly around total cost of ownership, risk and throughput.

Let's break down how ultrasonic sealing works and how to evaluate if it's the right solution for your products, just like we would for any of our customers that are weighing their options.

How Does Ultrasonic Sealing Work?

Ultrasonic sealing technology uses acoustic vibrations to generate heat at a molecular level inside of the film itself. These vibrations, created with an anvil and sonotrode, excite the molecules in the plastic so that they start moving. The plastic becomes soft and starts melting and the components are bonded by cohesive or form-fit joints After a short hold time under pressure, they are firmly joined molecularly.

This molecular friction allows the material to seal without the need for direct heat on the material from the VFFS seal jaws.  Also, it is capable of sealing through product caught in the seals. That in itself can be an advantage for applications and we see this often with the packaging of fresh produce.

Since vetting out the absolute best packaging solution for each application is (or should be) everyone’s goal in the packaging industry, let’s explore how ultrasonic film sealing compares with the traditional heat sealing method and evaluate if it is the best choice for your stand up pouches or pillow bags and ultimately- your bottom line.

After all, as cool as it is, just because a 3D printer can create a livable house, it does not mean that the house is a fit for the needs or wants of you and your family.

Because the seal is typically considered to be much smaller with ultrasonic sealing then with heat sealing, estimated at up to 75%, it is perceived that ultrasonic sealing excels in this category. While it may have a smaller seal, the difference between seal length is not necessarily as small as one might think. In a recent comparison Rovema conducted with one of their clients, they were able to decrease the difference in seal width to 2 mm. With the knife gap included in both sealing methods, true ultrasonic sealing length ended up being 4 mm while Rovema’s engineered solution was a 6mm seal. In this case, the customer decided to go with the heat seal option as the 2 mm difference was not as important as achieving a higher BPM (bags per minute) rate.

We see that with the larger seal that is typical of heat sealing, you have a benefit of a more secure seal due to the width. On the other hand, the smaller seal created by ultrasonic sealing can provide less waste of raw material.

Another aspect of seal width is appeal. A recent article in Packaging News pointed out that some customers, especially in the snack industry, prefer the look of a thicker seal. Aesthetics is ultimately perspective, however, and the image that works for one brand may be irrelevant for another.

Bags Per Minute and OEE

Heat sealing is the current winner in the BPM competition. This rate can change depending on product, film, machine, and other factors but all things being equal, heat seal technology surpasses ultrasonic in BPM and often sees increases of 40 + bpm over ultrasonic sealing.

While ultrasonic technology has and is continuously making improvements, heat seal is still able to match and exceed bpm rates. The consideration here is how many bags per minute do you need or want from your machine?

Some customers note that their over throughput of their production line has increased with the use of conversion to ultrasonic. They site some of these advantages:

Ultrasonic sealing takes the lead when it comes to lower energy consumption. In a study conducted by Bach, Thurling, and Majschak they determined that:

“Interesting is the fact that the energy consumption for ultrasonic sealing is almost independent of the machine speed. In ultrasonic sealing, energy is consumed only during the sealing process itself, except for some joules for continuous operation of the generator. In conduction sealing, the bars have to be heated all the time. They permanently emit energy via convection and radiation, even when nothing is being sealed or the machine stops. The energy consumption for conduction sealing strongly depends on the machine speed and is reduced at increased machine output”

The initial cost difference is drastic between ultrasonic sealing technology vs current heat sealing using servo-driven seal jaws. It's crucial to look at the total life cycle and ROI, and for some products and markets, ultrasonic sealing appears to begin to make up for that with its lower energy consumption and raw material usage.

Across the industry, adding ultrasonic sealing to a VFFS machine solution will cost you in excess of $50,000. This might seem like a drop in the bucket when you evaluate the Total Cost of Ownership- particularly for equipment with no end of life.

It's also important to factor in the cost of maintenance and of replacement parts of your ultrasonic sealing system. For heat sealing, if a jaw is damaged, which is often from rough handling during maintenance or changeovers or from coming in contact with a hard piece of product like a frozen pea or a dried bean, a set up replacement jaws will cost you around $1,500 to $2,000.

In parallel, a replacement for the sonotrode component that interacts with the anvil to create the molecular friction will cost around 3-5 times that of a set of new seal jaws and the replacement cost for the complete jaw carrier and sonotrode insert is around half of the total cost of the system.

These costs you'll need to consider might seem to outweigh the benefits, and for some industries, it often does. But their are some key industries where the benefits are a game changer.

When is Cold Sealing a Game Changer?

Another advantage often touted for ultrasonic sealing equipment is that it is beneficial for products that are more sensitive to heat such as chocolate, cheese, produce, and other items. This particular point is not as relevant as it appears at first glance. Many VFFS machines can incorporate bevel plates in their design specifically for these sensitive products thus preventing the heat from interfering with the structural stability. The real benefit of ultrasonic sealing has more to do with its ability to seal through product, which is a reason why we see this being used more frequently with salad and fresh produce.

Some VFFS machines which are set up for ultrasonic sealing are capable of exchanging sealing methods. Switching out the jaw, you could go from a heat seal to an ultrasonic seal or vice versa. I cannot speak for all manufacturers, but this process is able to be completed in under 10 minutes with Rovema's BVI or BVC machine family.

The type of sealing technology to use can be dependent on what you need for your product. We all want to be front runners in innovation and trends. But more than anything, we want to make sure the right solution goes to the right application. 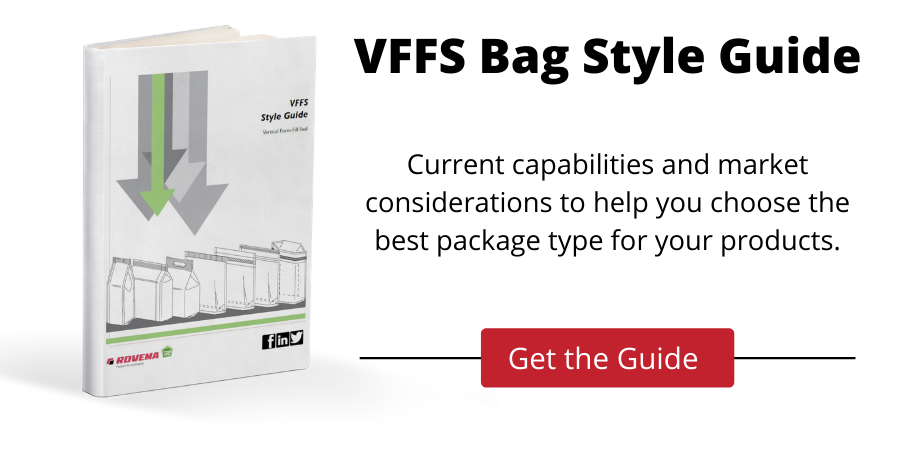